The accordion was introduced into Japan in 1850 by Sensuke Asahi, who donated one to the Shinto shrine, Miho Jinja in the sparsely populated Shimane prefecture. 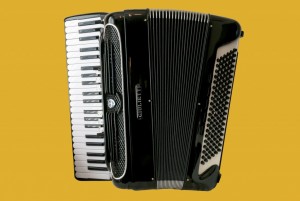 Of all instruments, the acoustic accordion is the most fascinating. It is a living, breathing instrument, and its vibrations can be felt when you are playing it.

It is also a stereo instrument (one sound source is stationery, the other moves), thus producing polyphnic sounds. While complex, it is capable of producing the most beautiful, even soulful sounds and variations in timbre, dynamics and sustain that other instruments can only dream of. Indeed, the accordion is capable of not only being able to sustain notes and chords almost indefinitely, it remains one of the minority of instruments that is capable of playing melody, harmony, counterpoint, and rhythm at the same time. It is totally self-contained, and played as a solo instrument; it can also be played in combination with any other instrument, and it can play in any kind of music genre.

The accordion is also a highly portable instrument (it is even possible to play it while walking), and does not need tuning as often as a piano, with which it is often compared. Also, like the piano, it can accompany itself.

The basic structure is common to most accordions, which are constructed mainly of wood and metal. There are more than 3,500 parts in a full-size accordion. The best instruments are largely crafted by hand, using the best available materials to achieve uncompromising tonal beauty and superb workmanship.

An accordion consists of two keyboards, but three principal sections.. There are two main systems of right-hand keyboards; the piano keyboard and the button (or chromatic) keyboard. In the middle is a set of bellows (the air flow is the same for both keyboard), controlled by the left hand. The instrument is ‘worn’ on the body with the use of comfortable shoulder straps, and can be played seated or standing.

The accordion is an acoustic instrument.. It is a wind instrument, because it breathes.  As air is passed through steel reeds by use of the bellows – the lungs of the instrument. The accordionist shapes the sounds that bring musical compositions to life by making its reeds vibrate.

The bellows are controlled by the left hand. By using them, the instrumentalist controls the flow of air to the reeds – located on wooden reed blocks within the treble section – and can produce sounds from quiet to loud. The accordionist can also sustain notes for a long time, something that a piano (a percussion instrument), for example, cannot do. Indeed, notes can even be “bent” by using the bellows to push more air through certain reeds.

A full-size piano accordion has 41 treble keys for the right hand (24 white keys and 17 black keys) and 120 basses, in the form of buttons, for the left hand. These are arranged in six rows, each having 20 buttons; the first two rows of 20 are ‘single’ bass notes, while the other four rows are major, minor, seventh, and diminished chords

A full-size accordion with chromatic (button) keyboard for both hands has 64 treble buttons (some notes and rows are repeated, so chromatic chords and certain note clusters can be played faster than with a piano keyboard, although many chords are more difficult, which makes the instrument less desirable for jazz improvisation), and 120 bass buttons. 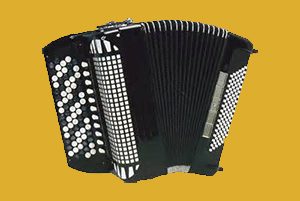 There are two principal bass systems for the instrument, with a third that is a combination of both:

1. The “Stradella” or standard bass system has its 120 bass buttons arranged in six vertical rows of 20 (some are duplicated, because there are only 12 different notes in a chromatic scale). There are two rows of single button bass notes with almost a one octave range, and four rows of pre-fixed chords (major, minor, dominant 7th, and diminished 7th chords). This configuration is used by the majority of accordionists today, because the chords are arranged in the “cycle of fifths” used in many types of music, with the exception of pure “classical” music.

3. A third system, called the ˜Convertor” or “Transformer” Free Bass, allows the instrumentalist to select either the standard Stradella bass system or the Free Bass system simply by pressing a bar, or special register. The convertor free bass system disengages the pre-set bass chords, permitting the player to form chords or play single notes, as the music may require, without the free bass mechanism adding size or much extra weight.

There are advantages and disadvantages to both of these approaches. It is up to the player to choose which system is best suited to his or her tastes.

The most expensive ‘top of the line’ models include a tone chamber (cassotto) within the treble keyboard mechanism. This is constructed of alumunium or wood, and acts as a resonator to enhance the sound produced by the reeds.

What separates an average accordion from a high quality instrument is the quality of the reeds. Handmade reeds (particularly those made by the Italian craftsman Binci – or in older instruments by Pancotti) are far superior to machine made reeds, and much sought after by the really knowledgeable professional accordionists. If you are considering the purchase of an accordion, it is better to buy the best instrument (with handmade reeds) that you can afford.

Reedwax Music publishes compositions across the entire musical spectrum of the instrument (for both standard bass and free-bass systems).

There’s nothing that rhymes with accordion

The beastie that comes in three parts

With one hand on right, and another on left

And a middle that makes it all start.

Until air breathes some life in its heart

Just think with the bellows not connected

Perhaps it would just fall apart!

You can’t see the bass without mirror

The right hand goes downwards to up

That sound comes at all is by luck

But, given the quirks and the follies

Of the strange looking box on my chest

That the accordion is simply the best!