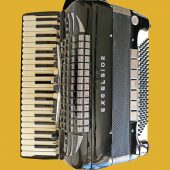 Douglas Ward grew up in Hampshire, England, and has played the piano accordion since age 10. He was taught the instrument by Eddie Moors, of Bournemouth, and, later, Joe Biviano of New York. He won several accordion competitions in the UK.

He turned professional in his late teens and played in many venues throughout the UK. He also played on one of the first colour television broadcasts in England – with both the Francisco Cavez orchestra and as a soloist.

In the 1960s he played for Saturday evening dinner dances at the five-star Chewton Glen Hotel in the New Forest (Hampshire), with his trio (accordion, guitar, drums). One of his guitarists, with whom he enjoyed playing immensely, was Robert Fripp, who later became a founding member of super-group King Crimson.

In May 1965, soon after he was elected to the Board of Governors of the National Accordion Organization (NAO), he introduced the Convertor Free Bass instrument (Ivor Beynon had already introduced the Bassetti Free Bass instrument) to UK accordionists. He also wrote several feature articles for Music Accord magazine under his own name, and contributed regular news items under the pen name “Doogle”.

As a professional musician for more than 20 years, the instrument took him around the world – literally. He spent several years as leader of a small musical group aboard the Cunard ocean liners RMS Queen Elizabeth, RMS Queen Mary (RMS = Royal Mail Ship) and, later, the beloved Queen Elizabeth 2 (known as QE2). Geraldo, whose office was in New Bond Street, London, was his agent (aboard QE2 the agent was Gary Brown).

When RMS Queen Elizabeth berthed in New York (approximately every second week between 1965 and 1968), he would visit the Greenwich Village jazz clubs Village Vanguard and Top of The Gate (it was the upstairs venue of Village Gate, in Bleeker Street, New York City), and on several occasions took his accordion with him to ‘jam’ with some of the jazz greats of the day. The drummer in his group, Gerry Reynolds, often had lessons in New York with noted jazz drummer Jake Hanna.

On many occasions he visited the specialist accordion music publishers O. Pagani, and Pietro Deiro Publications – also in New York’s Greenwich Village. At that time, renowned accordionist Pietro (Lee) Deiro Jr. (son of Pietro Deiro) had a music store, at 133 Seventh Avenue South (at present it is an Italian bistro), while accordion music publisher O. Pagani & Brothers was close by, at 289 Bleecker Street.

Whilst at sea, he played aboard several ships belonging to other companies (Fred Olsen Cruise Line’s Black Watch; Royal Mail Line’s Andes and Reina del Mar; Shaw Savill and Albion’s Calypso, Ocean Monarch and Southern Cross; Ulysees Line’s Calypso; Union Castle Line’s Pendennis Castle) although he played on the Cunard Line ships the longest, he acquired a great love for cruise ships, and went on to become an expert (some say “guru” in the field), and is the author of several books for world-renowned language and travel book publisher Berlitz Publishing.

During one particular transatlantic crossing of RMS Queen Elizabeth, Charles Hansen, a passenger in First Class, listened to his trio every day during a lunchtime cocktail set. He liked what he heard, and asked if he would like to work for him as an arranger music transcriber. Douglas told him he would like a change, but didn’t think anything would come of the offer. His contract with Geraldo and Cunard was due to end in December 1966.  Unexpectedly, in November, Charles Hansen (Chas. H. Hansen Publications) sent Douglas an Eastern Airlines ticket from London to Miami (Hansen Publications headquarters). He told his agent (Geraldo) and Cunard that he would take a break for a few months. So, in December, Douglas duly flew to Miami, and was met at the airport by Susan Hansen (one of two daughters of Charles Hansen) in her father’s Rolls Royce. He stayed at Charles Hansen’s rather large home in Miami Beach (he was given a newly imported Mini-Moke to drive around in), and was introduced to various people at the company’s headquarters. Three weeks later he was sent to New York to work in the office there.

The office was on the 4th floor of a building on 5th Avenue at 48th Street – opposite Korvettes (a department store) and above a Chock Full O’ Nuts coffee shop (48th Street was known as the “musicians” street – home to well-known stores Sam Ash Music, Manny’s, and Alex Accordions (this still exists today, but is now on 57th Street). The Hansen Publications director was music educator John Brimhall, noteworthy (no pun intended) as the most published arranger of printed music in history. Douglas worked under his mentor John Lawrence Bannister, second in command to John Brimhall, in the Popular Music division.

As a transcriber/arranger, Douglas would receive record pressings prior to their general release, listen to them, write down the lead lines, accompaniment and words (if any). Once transcribed, he would give the completed transcriptions to women in the office who typed them into their bulky Musicwriter machines (ribbon-based music typewriters – invented by Cecil Effinger and made by the Music Printer Corporation of Boulder, Colorado), one note at a time. The finished music would then be dispatched to Miami, where Hansen Publications had its printing presses (at .824 West Avenue, Miami Beach). After printing, the sheet music would be distributed and released on the same day as the record. Hansen Publications also produced accordion transcriptions and arrangements in solo and album form.

Douglas worked mainly on music of The Beatles (MacLen Music, sometimes issued as sheet music in the USA under the Hansen Publications’ Keys Pops brand), The Monkeys, Herb Alpert and the Tijuana Brass, among others. Hansen Publications also published jazz and gospel music, as well as music and educational material for school marching bands.

He says: “One particular song I remember transcribing was The Beatles’ Strawberry Fields Forever. It took a while because the beginning consisted of four flutes, which were slightly out of tune. The reason was that the flutes were recorded “live” on tape by studio musicians for a special instrument called a Mellotron. This keyboard instrument, which looked like an organ, consisted of several hundred tape loops of real instruments. When you pressed a note on the keyboard, it started the tape for that particular instrument, except that if you pressed a C, the tape played not C, but something like F Sharp! When I completed the transcription, the sheet music was released in the USA as a MacLen Music, Inc. publication (c/o Walter Hofer, 221 West 57th Street, New York). The number on the back page was 367/M/13392 – I still have a copy. On the flip side of the soon-to-be-released record was Penny Lane – which took much less time to transcribe”.

“It was a most enjoyable, memorable time. During some of that period, I stayed in a multi-room apartment on 86th Street and York Avenue (then known as “Germantown”). For the rest of the time, I occupied an apartment above the Hansen Publications music warehouse at 566 South Broad Street, Glen Rock, New Jersey, and had the use of a bran-new red Ford Thunderbird. Each day I would drive along Route 4 and cross the George Washington Bridge into Manhattan. I met some fine arrangers and music transcribers during that period of my life. And, from the office, it was easy to walk down the few steps to get a cup of coffee at Chock Full o’ Nuts – for 10 cents!”

However, he missed playing live, and so, he went back to ships. When working aboard RMS Queen Elizabeth (always in First Class) he met and talked with several film stars, including Elizabeth Taylor, Richard Burton, Moira Shearer, and Hermione Gingold. He also met and talked to giants of the music world, including Leopold Stokowski (conductor of the Philadelphia Symphony Orchestra). And, during crossings of the North Atlantic, on more than one occasion, the ship carried the Count Basie Orchestra and the Duke Ellington Orchestra. At night, participated in several impromptu ‘jam’ sessions with some of the musicians from these great bands.

In the early 1970s, he moved to Bermuda, where he was a solo entertainer in three hotels operated by Trust House Forte. His regular hotel – Harmony Hall, in Paget Parish – was always full.

In 1972 he recorded an album together with Allan Ganley (drums) and Charlie Webb (double bass), of original compositions and songs by Douglas Ward, called “From and Elevated Platform”. Although it was pressed by Decca Records in London, it was never released commercially. However, about 1,000 records were sold, and some tracks turn up occasionally on various radio stations (particularly in the USA).

While in Bermuda, he also wrote a number of jazzy compositions in unusual time signatures (10/4, 11/8, 15/4, 19/8) and became an admirer of the style of music played by California-based jazz trumpeter Don Ellis (who played a four-valve quarter-tone trumpet made by Holton) and his orchestra. Shortly afterwards, he met Don Ellis in England at Elstree Studios in Hertfordshire, England, and played during the sound recording for a science fiction movie called “Moon Zero Two” (a space-western released in 1969 that became something of a cult classic). Don Ellis took two of his composition (one in 10/4, the other an 9/8) although his orchestra never played them.

RETURN TO THE USA

He moved to the USA for the second time in 1979, where he furthered his musical studies, including composition, in Philadelphia. While there, he joined the Musicians Union Local 77 and played regularly as part of a duo with Barbara Noska, a superb Philadelphia-based mezzo-soprano with an outstanding vocal range and ability. They performed together many times, took part in “New Music America”, and did some live radio broadcasts (Guy Klusevcek took over the role when Douglas relocated to England).  It was during this period that he also adjudicated at several U.S. state and national accordion competitions, including the national accordion championships held by the American Accordionists Association (AAA), the body responsible for overseeing competitions run by various state bodies and subordinate member organisations.

In 1986, together with the AAA’s Faithe Deffner, he organised a Floating Accordion Festival aboard the cruise ship Galileo. More than 600 accordionists took part in a 6-day accordion “Festival at Sea” cruise from New York to Bermuda, which was a tremendous success.

He lives with his wife in the south of England, and is a serious composer for the instrument (with more than 80 published compositions to his credit), as well as adjudicating at various competitions and festivals. He is a member of the Performing Rights Society, and his compositions are registered and identified with ISMN bar codes.